The Congress of New Caledonia is the country’s deliberative assembly, and its role and powers are defined by Part III, Chapter I of Organic Act No 99-209 of 19 March 1999 to establish the institutions of New Caledonia, which translates the prescriptions of the Noumea Accord into legal terms.

Congress is New Caledonia’s foremost institution as listed in the Organic Act.

The remaining institutions are the:

Congress is primarily an assembly of elected representatives from various political parties, some of whom can form political groups within Congress.
Congress has 54 members who bear the title of “Councillors of New Caledonia”.
It is made up of part of the members of each provincial assembly, ie:

A single election determines the membership of both the provincial assemblies and Congress.
Members of Congress are elected for 5 years.

The 54 members of Congress are elected every 5 years in five-yearly provincial elections.
Every year, Congress elects an executive committee from among its members, made up of the Speaker of Congress, Deputy Speakers, Secretaries and Quaestors. 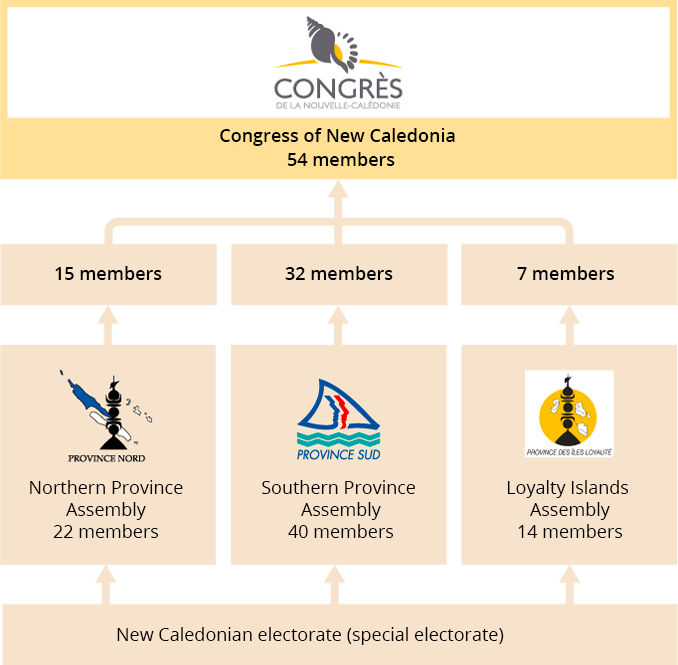 Members of Congress and the provincial assemblies are elected by a special or “restricted” electorate meeting the requirements of Organic Act no 99-209 of 19 March 1999 as amended.

In order to be eligible, candidates must be aged 21 or more and be registered on the special electoral roll in the province in which they stand. Only